Agoraphobia – The start of my anxiety disorder I was 30 when I was diagnosed with agoraphobia. By that time, I had spent 5 years living with it. Reading this, you might be thinking that it may have been a mild case of agoraphobia, believe me when I say there’s no such thing as a mild case of agoraphobia. When I first had my panic attack I thought I was going to die, my throat closed up, I couldn’t breathe, my chest got really tight, and started hurting so bad I thought I was having a heart attack. I remember I had just finished shopping at Brent Cross; it was a Saturday afternoon, it was so busy I could hardly move, and I was starting to feel a bit closed in, so me and my sister who was with me decided to head home. I never really liked crowds, but as I made my way across the shopping centre I found myself trying harder and harder to breathe.

I went home, thinking it was maybe a one-off thing.

I was living on my own at the time, but the idea of staying home alone that night scared me more than I wanted to admit. When my parents suggested I stay over at theirs for the night, I happily agreed. It was nice being back home, my brothers and sister were still living with my parents, and it was such a warm, loving atmosphere. I had moved out 6 months ago, after I got my promotion at work.

Being around my family took my mind off my panic attack, they were so lovely, we ordered pizza, had lots of ice cream afterwards and I slept in my old room. They hadn’t changed a single thing since I’d moved out – I felt safe again.

I put off going back to my place for the entire Sunday, I just didn’t want to think about it… it was now 6pm and I had to make a decision. I know I didn’t want to go back to my flat – I still didn’t think of it as home. But I didn’t want my family to think I was scared, so I announced half-heartedly that I should be heading back to mine. My mum has always been really good at sensing when I’m struggling with something, suggested why don’t I stay for a few more days, until I’m fully recovered and then I could go back. Looking back, I think if I had made myself go back to my flat, I would’ve felt more empowered. Instead I went with my brother and sister and got a few things I needed to stay over for a few days.

I did go back to my flat on Thursday, I felt more comfortable, work also helped, as I loved my job. It had definitely been more stressful at work, ever since I was promoted to being an account manager, with more responsibility and extra work load, which translated into longer working hours, but I loved the challenge.

Next Saturday me, my sister and brothers went shopping again. It was my way of relaxing – I don’t spend loads, but it was nice to get out spend the day walking around shops, buying the bits I needed and looking at the trends, and what was being displayed in the shops (I worked in fashion), so it was a nice way of staying on top of what our competitors are doing too.

The minute we pulled up, my stomach started turning churning.

Everything in my body screamed that I don’t want to be here, but I told myself to stop being a baby and get over it. I made myself go in – I think I lasted about 15 minutes, before I started hyperventilating. So we went home instead.

Over the course of the next few months, I changed places where I shopped, I started going in the evenings after work, or really early on a Saturday morning, so I could avoid the crowds, but whatever I did nothing worked. My anxiety level was so high that even the thought of going into a shop would make me feel sick. 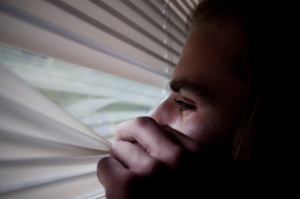 By this time my sister was really worried – I hadn’t confided in anyone else. She told my mum, and brothers what was happening. My dad didn’t believe in anxiety or any other mental health condition, so they didn’t say anything to him. My mum suggested that I move back home, she said maybe I needed a little bit of time to recover from my panic attack – I hadn’t told anyone else (including my sister) that I had had two more attacks and each time the hospital had put it down to anxiety. The nurse who tended me, looked at me like I was mad, when I said that they tend to happen when I go shopping, she said why can’t you use the internet? After the third one, that’s what I started doing.

I moved back in with my parents, I immediately felt safe again, but I stopped going out on Saturdays; instead I did all of my shopping online. I didn’t drive, so my sister picked up any toiletries I needed, and I had my clothes delivered at home. Things settled down for a little bit after that.

I thought I was managing ok – I wasn’t going shopping and my workload was such that I spent most evenings at work, but I didn’t mind that. I loved what I did. It was during one of my commutes to work in the morning that I felt the knot in my stomach that was so familiar to me, the train was more crowded than usual, and there was nowhere to sit, so I was standing. I started feeling dizzy and almost fell over someone’s briefcase. All of a sudden I just had to get off the train, it was all I could do to keep breathing until the next stop came. I pushed my way off the train, and stood at the end of the platform in a corner doubled over taking deep breaths.

I took the morning off and I went home. From that moment I avoided trains, I really put my family out, by making them take me to work in a car. It added and extra hour to my normal journey, as London traffic at that time in the morning was ridiculous but they didn’t say a word. They just did what I needed them to do.

Looking back, had they said no, I would’ve been forced to look at my behaviours, but they didn’t and I just carried on burying my head in the sand.

It was when I refused to go to my cousins wedding, pretending I was too ill, that they started thinking something was really wrong, but every time they mentioned it to me I used to get angry and aggressive which made them back down, not wanting to upset me.

It was when I refused to come downstairs when we had friends and family come round to visit, that I had to acknowledge that something was seriously wrong with me. I was having a mini panic attack upstairs, I was so used to them now, that I normally got through them without anyone noticing.

It was then that my dad realised how bad I had actually become; he had come up, and found me doubled over trying to take deep breaths and fighting back tears while everyone else was enjoying themselves downstairs.. He hugged me and I broke down. I had been fighting it for so long, I was exhausted, I was overweight, because all I did was sit at home and eat all day. I felt so ashamed, everyone was trying to look after me like I was a child, and I was the eldest.

My dad took me to the see my GP the following day. I thought I would have an instant diagnosis, and things will start happening – I had done enough research on the internet to know it was agoraphobia. But my GP put me on anti-anxiety meds and told me to come back in 3 months. The meds made it worse. I was emotional, depressive and crying all the time and to make myself feel better I was eating chocolate constantly. I was getting worse, and I didn’t know what to do. It took 4 more visits over 6 months to the GP to get the meds right, and even then they weren’t making a difference. It was then that the GP decided to refer me, but I had to wait 3 more months to get an appointment.

It is now 5years from my first panic attack, and I’ve just started therapy for my condition.

It’s been a difficult 5 years for both me and my family, I had to give up my job, because the meetings with clients and buying trips abroad were impossible for me to do. I have no friends, as I can’t go out to see anyone, and I’m so ashamed of how I look and what I’ve become ( a pathetic recluse) that I can’t bring myself to call anyone. I put one two stones in weight, I absolutely hate the way I look; I can’t see the light at the end of the tunnel, but my therapist assures me it’s there. I trust her, and so I will keep going to our weekly sessions, in the hopes that I will regain even a glimmer of my old self.