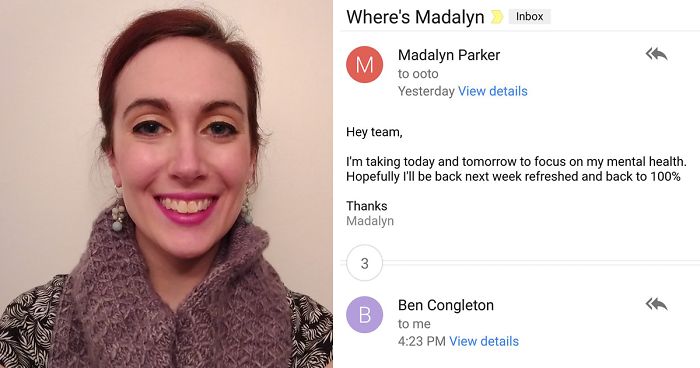 You have probably heard of Madalyn Parker by now. If you have not, she is the woman that wrote an email about taking a day off work to help her mental health. That email and her CEO’s response has since gone viral. This is both promising and worrying in equal measure.

The positive side of this coin is rather than being met with derision she received a very positive and supportive email from her CEO. He praised her for talking about mental health and encouraged others to do the same. This email conversation was shared by Madalyn, and has since gone viral; this started conversations about mental health at work and how it is viewed when compared to physical ailments. These are conversations that can only lead to good things.

The negative side of this coin is the fact that this email conversation went viral. Yes, I know, I have just used the same argument as a positive… But bear with me for a moment. Yes, the email went viral, and that gave mental health in the workplace a lot of exposure. However, this only happened because the situation was so far removed from the norm. Not many people feel comfortable discussing their mental health with their employers; fear of being judged, the perceived image of not being capable of doing their job stop many from disclosing their difficulties to their employer. On top of this they fear that their employer would doubt their ability to take on further responsibility, thus hindering future promotional prospects.

Had she had the time off due to suffering from a virus, for example, would we be surprised that her employer supported her absence from work to recover? But as it was mental health we are left surprised (pleasantly so), that she received such support from her employer.

We need to see a parity between physical and mental ailments. We should feel comfortable discussing mental health the same way we discuss physical health; we should receive the same support from our colleagues regardless what we’re suffering from. And also, on a more elevated level, we need to start seeing the same funding within the NHS being given to mental health as we do physical health. Until we get to this point, experiences like Madalyn will still receive the widespread hysteria that it has.